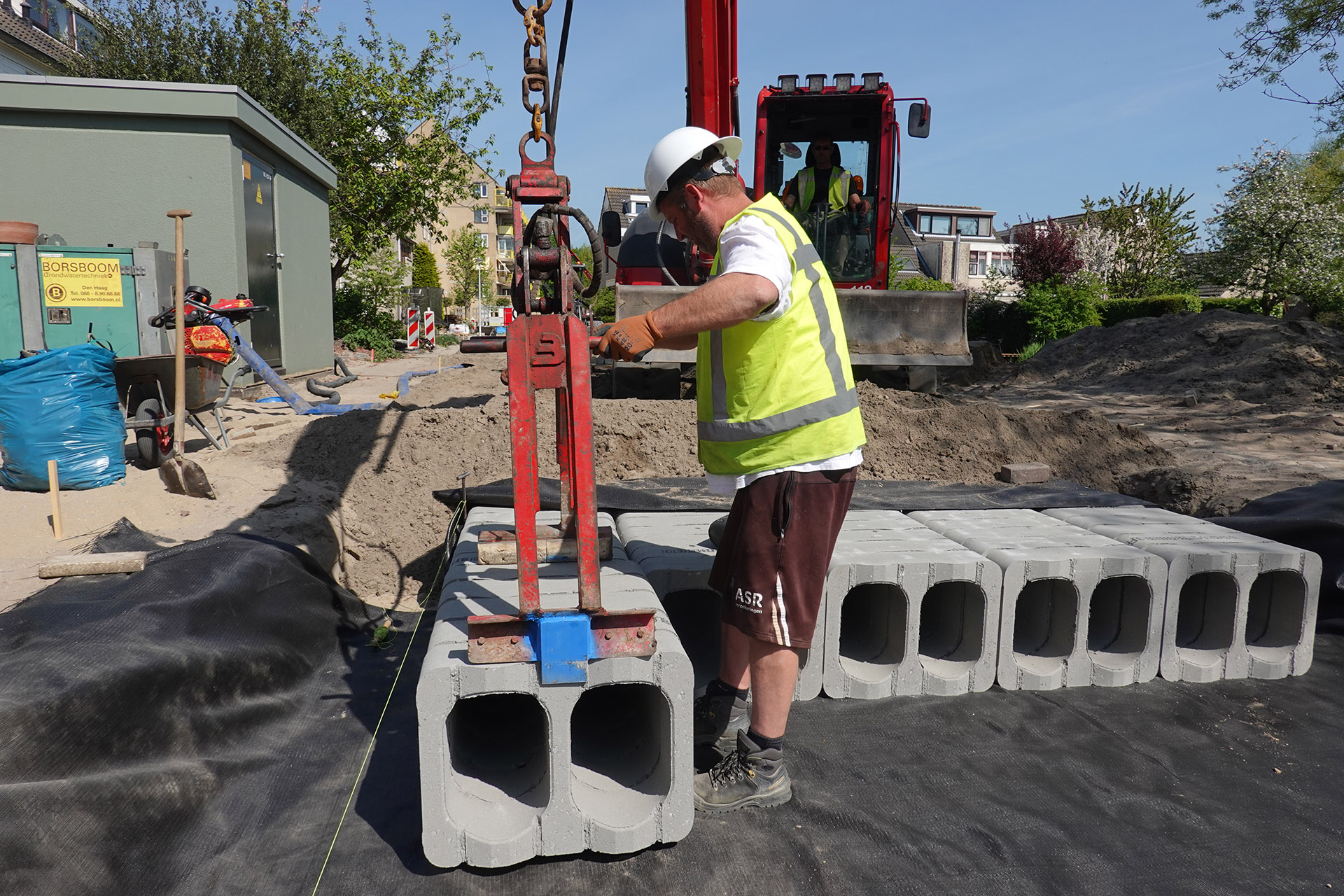 As our cities grow, so too does the risk of flooding. Urbanisation reduces the amount of land available to soak up rainfall, meaning drains and sewers can become inundated and overflow during storms. Starved of rainwater, the ground under paved areas also dries out and settles, causing damage to buildings.
To address this issue, the EU-supported Bufferblock project, hosted by Dutch firm Bufferblock, is offering city planners a way to return water to the soil. Their patented concrete blocks are placed in the ground to form a network of channels that enables stormwater to be stored, redirected or permitted to leach into the ground as needed.
“There are already solutions like plastic infiltration crates,” explains technical director Aroen Mughal. “The disadvantage is they need to be installed under a top layer of at least 80 cm to carry heavy traffic – otherwise the crates will collapse.”

In contrast, the concrete Bufferblocks can be placed almost directly underneath the road surface. The blocks have a density of around 1 000 kg per cubic metre, comparable to pumice (used as a lightweight fill in road building) but with a much higher water storage capacity – up to 500 litres per square metre.
The ability to bury the blocks just beneath the street surface is also advantageous in places with a high water table like the Netherlands, and in areas with very shallow bedrock. They can also be cleaned and inspected using standard sewer maintenance equipment.

Since 2018, Bufferblock’s technology has been on demonstration in the Netherlands’ Green Village, a model town in Delft built to showcase innovative urban designs. The concrete blocks were also recently installed under two streets in Capelle aan den Ijssel, a municipality near Rotterdam. Water can be directed to the Bufferblocks through conventional drains or allowed to directly infiltrate the channels via permeable paving. As well as offering more strength than plastic infiltration crates, the concrete blocks are cheaper to produce. “It’s also an affordable solution,” says Mughal. “They are pure concrete, not reinforced, and can be produced at a high tempo with the same machines which are used to make paving stones.”

Project co-director Dorian Hill says financial support from the EU helped Bufferblock to develop the company’s relations with producers across Europe. “Through our feasibility study we researched several producers in Belgium, Germany, Ireland and the United Kingdom. Now they are really interested in talking with us to produce Bufferblocks,” she says. “What was prototype is now a product.” Bufferblock is a family firm – Mughal and Hill are cousins, and Hill’s mother and uncle also work alongside them. Through their parent company Hill Innovations, they have been designing environmental management solutions for almost a decade.

The next step for the Bufferblocks, says Hill, is to develop the machinery needed to automatically install them during road building projects, which will further reduce the cost of the novel infrastructure. It’s unlikely the city dwellers walking above Bufferblocks will recognise the humble bricks’ role in keeping their feet dry. However, they may notice other changes: “Bufferblocks will not only prevent flooding,” says Hill: “They will also help nature and can even improve it, by making more space for green within the city.”